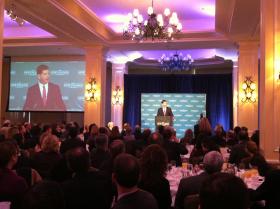 Boston Mayor Marty Walsh made his first address to the business community Friday morning at a breakfast with the New England Council at the Boston Harbor Hotel.

Walsh and the business community are still getting to know each other. Over the years, former Mayor Tom Menino developed a ritualized way of interacting with big Boston business: he’d open with a few self-deprecating jokes, acknowledge helpful individuals, hail responsible development, an educated workforce, opportunity for women.

There was some of that in Walsh’s address at the Boston Harbor Hotel. He began by introducing his staff:

“Keith Williams, director of the office of small and local business enterprise..applause…the reason why I’m doing this is so when you’re leaving, if you see them, grab them, so you made those connections because we really want to have a good interaction with a lot of you in this room.”

But Walsh admitted he wanted to open up his address to the business community in an unusual way.

“I know talking about violence, safety, and inequity in public housing might not be the norm in an economic forum like this in the morning, but I believe they’re important to our city and our region.”

He talked about his concern that the city has seen nine homicides this year, that Boston still needs more early childhood education, and that the homeless population is up – to more than 7 thousand people.

“This group here is focused on economic development. And I’ll talk in a minute about it. During the campaign I said that we’re all in this together. That means that all of us have a stake in Boston’s success, and the future of Boston.”

Walsh asked the audience for three things: to participate in the Boston Youth Fund, which pairs high school students with summer jobs; to support immigration reform; and to push the federal government to send Boston more money for public transportation.

There were some other hot topics of interest among the business audience, such as union influence on City Hall, restructuring the powerful, developer-friendly Boston Redevelopment Authority. Those conversations, however, are more likely to take place in private.