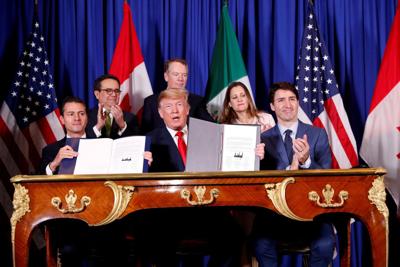 BOSTON — The New England Council, a nonpartisan alliance of businesses and organizations in the six New England states, called on Congress to approve the proposed U.S.-Mexico-Canada Agreement (USMCA).

The council, in a letter sent this week to members of the region’s House and Senate delegations, stressed the importance of free trade with these two key trade partners for the region’s continued economic growth.

“Canada and Mexico are two of New England’s top trading partners, and it is vital to our region’s economic well-being that we continue to have free trade with our neighbors to the north and south,” said James Brett, president and CEO of the New England Council.

“We have heard from council members throughout the region, representing a wide array of industries, that they support the USMCA and the important updates it makes to NAFTA by addressing such issues as digital commerce and intellectual property protection,” he said.

The letter said Canada is a top export market for New England businesses, with nearly $8.8 billion in goods exported in 2018 alone, plus another $3.3 billion in exported services.

The letter also noted that more than 430,000 jobs in New England rely on trade and investment with Canada.

Exports from the six New England states to Mexico totaled nearly $4.2 billion in 2018.

﻿This fall, The New England Council will launch a new virtual event series called ﻿“Inside the Corner Office.”