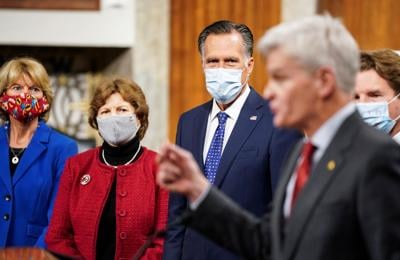 It feels like finals week at college, Sen. Jeanne Shaheen said on a videoconference Tuesday with the New England Council.

Congress is trying to wrap up a bill to fund the government, and negotiating a second COVID-19 relief bill, based on the bipartisan framework to which Shaheen and Sen. Maggie Hassan contributed.

The bill is expected to include $80 billion for unemployment to provide $300 per week for 16 weeks, Shaheen said, and another $300 billion for small businesses.

In a telephone town hall on Wednesday evening, Reps. Annie Kuster and Chris Pappas also pushed for a COVID-19 bill this week.

“It’s long past the time to get additional relief out there, to our families, our workers and our businesses,” Pappas said.

Aid for state and local government, including $160 billion for cities, towns and counties — supported mainly by Democrats in Congress but also backed by Gov. Chris Sununu — was stripped from the bill.

Pappas said states needed that funding, so they can ramp up vaccine distribution.

“It’s not going to be everything we need,” Pappas said of the current bill, saying he wanted to see another relief bill in January.

But he said the bipartisan framework was a good start, and he thought there was a good chance it would actually pass.

“Nothing’s a done deal in Washington until it’s actually a done deal and signed into law,” Pappas said.

Hassan called on the Senate Homeland Security Committee to make cybersecurity a priority this week, after hacks into U.S. government agencies first reported by Reuters.

“I will continue working with my colleagues on both sides of the aisle to fully investigate this breach and understand how we can better protect our national security and economy,” Hassan said in a statement this week. “Once we understand the full scope of the damage, the administration must immediately work to eliminate the vulnerabilities that led to this attack and strengthen our cybersecurity systems to prevent future attacks.

Shaheen also signed onto a letter this week asking the FBI and the Cybersecurity and Infrastructure Security Agency to brief congressional staff, and asking for more information about the investigation into the hacks.

Between January and May of this year, the post office logged more than 12,400 complaints about mail delivery in New Hampshire, according to the report.

COVID-19 seemed to have had an effect on how much mail was sent and received in New Hampshire. The number of packages passing through a sample of New Hampshire post offices was up in May, according to the report, 59% over the same time in 2019.

But the Inspector General’s recommendations had nothing to do with COVID-19, and will sound familiar to anyone who has considered the state’s workforce: the post office has not been able to hire and retain enough people to keep mail delivery running on time.