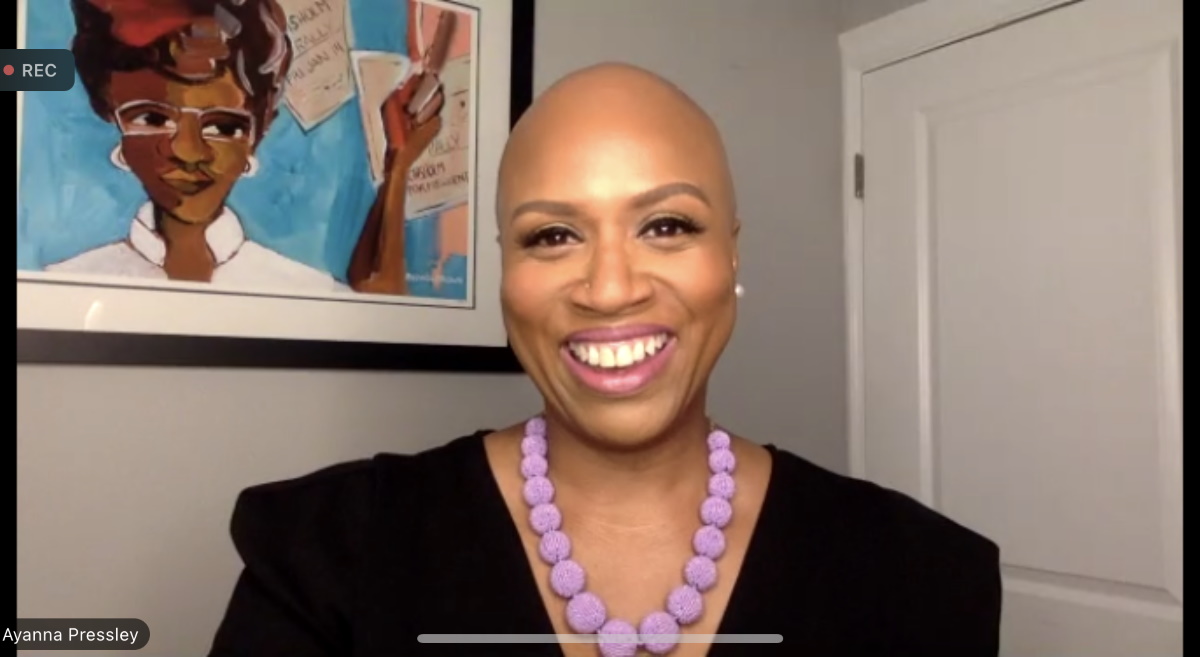 BOSTON (SHNS) – With Democrats clinging to a slim majority in Congress, U.S. Rep. Ayanna Pressley said Thursday the next recovery package should be big and inclusive of everything from roads and bridges to housing, child care, and paid family leave, warning Democrats against breaking up the White House’s massive relief proposals to get something done.

“I want it all, but it’s not just because I want it all. It’s because our constituents need it all,” Pressley said.

Pressley spent an hour on Thursday morning talking with the New England Council about her work in Congress and what she has prioritized for the $2.3 trillion “American Jobs Plan” and the $1.8 trillion “American Families Plan” put forward by President Biden.

“I want to do one big bill. We don’t want to break this up,” she said.

Pressley also cautioned her colleagues against jeopardizing a massive infrastructure bill over one issue, which some Democrats are threatening to do if the final package doesn’t eliminate the Trump-era cap on state and local tax deductions.

A bipartisan caucus of 32 Democrats and Republicans from high-cost states like New York, New Jersey and Illinois has formed to push for the repeal of the limits put in place by former President Trump and a GOP-led Congress on the SALT deduction to pay for other tax breaks.

The SALT cap was also controversial in Massachusetts, where property and other taxes can easily push families past the 10,000 deduction cap, but not a single member of the Massachusetts delegation has joined the SALT caucus so far.

“I think taking this red line is really losing sight of the broader package and the big fights, so I don’t want to be insensitive to the fact that SALT is a pressing issue in their districts, but come to the table, roll up your sleeves, let’s work together on this proposal,” Pressley said.

“There are so many critical investments in this bill that the people that we represent need, so you don’t want to miss out on the benefits of the broader package and big fights ahead of us,” she continued.

While the “American Families Plan” proposes to extend the expansion of the child tax credit provided for in an earlier relief package through 2025, Pressley said she’s fighting to make the larger child tax credit permanent.

The American Rescue of Act of 2020 expanded the child tax credit to a maximum of $3,600 for children under 6, or $3,000 for children aged 7 to 17, but it expires after 2021. The White House released a fact sheet Thursday estimating that Biden’s latest proposal would help 1.1 million children in Massachusetts, including 471,000 children of color, and would reduce child poverty in the state by 34 percent.

The Dorchester Democrat also said she’s working with Rep. Katie Porter of California to eliminate what has been called the “single parent penalty” that sees the child tax credit phase out at lower income levels for single-parent households compared with married tax filers.

“They deserve this relief and this benefit as well,” Pressley said of single parents.

Other priorities for Pressley include guaranteed paid family and medical leave for workers, lowering the age of eligibility for Medicare to 55, investing $70 billion in public housing and eliminating up to $50,000 in debt for student loan borrowers.

During a question-and-answer session with the second-term Congresswoman, New England Council President Jim Brett asked her about the prospects of a bill known as the Improving Corporate Governance through Diversity Act reaching the president’s desk.

Brett said the bill has strong support in the region’s business community, but he questioned its chances in the divided Senate. The bill would require public companies to report to the Securities and Exchange Commission information on gender, racial and ethnic diversity.

Pressley, who sits on the House Financial Services Committee, said she believed the Democratic caucus in both the House and Senate would support the bill, but called the Senate “an obstructionist body in its current form.”

“This is one more reason that we need to get rid of this filibuster, in order to pass this and many other bills that would certainly pass with a simple majority in both chambers,” Pressley said.

Brett also asked Pressley what businesses could be doing to support working mothers, who have shouldered a significant burden during the pandemic. Brett said 2 million women have left the workforce since March 2020.

“I think that’s what we should be seeing from any competitive business in New England,” Pressley said.