Perry holsters rhetoric
As originally appearing in The Boston Globe 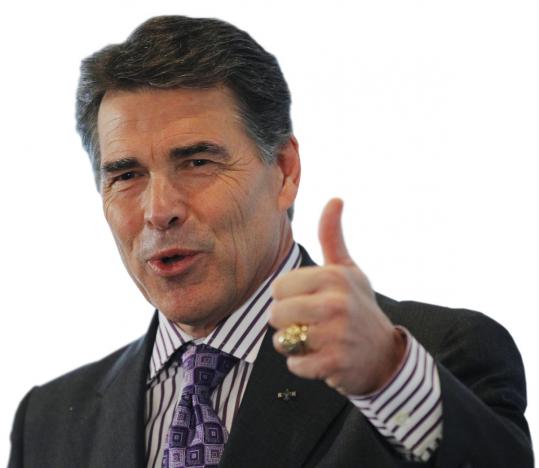 titled “Dear Yankee, Eight things you ought to know before you start writing stories about Rick Perry.’’ But to Eastern ears, the current Texas governor who is running for president sounds just like the other one who ran and won. To smug liberals, those eerily familiar cadences amount to a career-killer.

But one attendee who left yesterday’s Politics & Eggs breakfast said that sounding Bush-like is not a bad thing – especially in New Hampshire. Like Bush, Perry is positive and “likable,’’ said this politically savvy businessman who didn’t want to be named. He had to go home to Boston, after all.

On first impression, Perry is likable – more so, if you forget his shoot-from-the-lip ideology, along with what the Wall Street Journal describes as his “muscular religiosity.’’ Perry’s problem: In a presidential contest, no one forgets when a candidate uses the word “treasonous’’ to describe the head of the Federal Reserve, or overlooks it when that candidate signs an official proclamation calling for prayer to bring on rain in Texas. But for now, Perry’s likability is a real problem for Republican rivals Mitt Romney and Michele Bachmann.

Perry’s announcement that he is in the presidential race elbowed both Romney and Bachmann off center stage, and pushed them down in the polls. The breakfast showed he is off to a serious start. The room was packed, but the crowd was cool. The governor, looking Back Bay buttoned-down in a gray suit and striped shirt, read the vibe perfectly. He ditched some of the swagger and just worked the “Yes, Ma’am’’ twang.

Focusing on the economy and President Obama’s handling of it, he offered a simple, standard, business-friendly message to a standard business crowd. It’s familiar conservative dogma: less spending, lower taxes, and reduced regulation are the answer to the country’s economic woes. Romney offers a similar message, mostly from the vantage point of his past private-sector experience. Perry frames his more in the context of his experience as governor.

Perry didn’t back down from earlier harsh rhetoric concerning Fed chairman Ben Bernanke and how Texans might treat him “pretty ugly.’’ But he didn’t recycle that inflammatory rhetoric, either. Instead, he called for greater transparency from the Federal Reserve to show that the bank was not engaging in improper actions. The Dodd-Frank financial reform act, which was passed a year ago, calls for similar scrutiny.

Just when you think Perry might be going centrist, he threw out his suspicion that global warming is a hoax and scientists who promote it are manipulating data to qualify for research funding. It’s a smart move in Republican-primary land. Romney has flip-flopped his way to his current position of believing that global warming exists and human beings contribute to it. Watching Romney squirm over that in future GOP debates should be entertaining. Rivals will try to make Perry squirm, too.

His record in Texas includes controversies that upset the left, and, more problematic for the primary season, the right. At the breakfast, Perry was asked about his executive order requiring that sixth-grade girls in Texas be vaccinated against the human papilloma virus, a sexually transmitted disease that causes cervical cancer. Lawmakers overturned it and Perry now said that he made a mistake by getting ahead of the legislature.

Admitting mistakes is not all that common on the political circuit, although this admission is fairly self-serving. It wasn’t enough for Laura Condon of Bedford, the woman who asked the question. She questioned how, given his track record on the vaccination issue, he could run as a candidate who opposes government intervention in private lives. That does not fit in with New Hampshire’s belief in “freedom and limited government,’’ she said. A registered Republican, Condon said she is leaning to Bachmann, because “You know where Michele Bachmann stands.’’

Perry will stand or fall on issues like that. No matter how Bush-like he sounds, it is wishful thinking for anyone to believe that Texas fatigue alone will do him in.