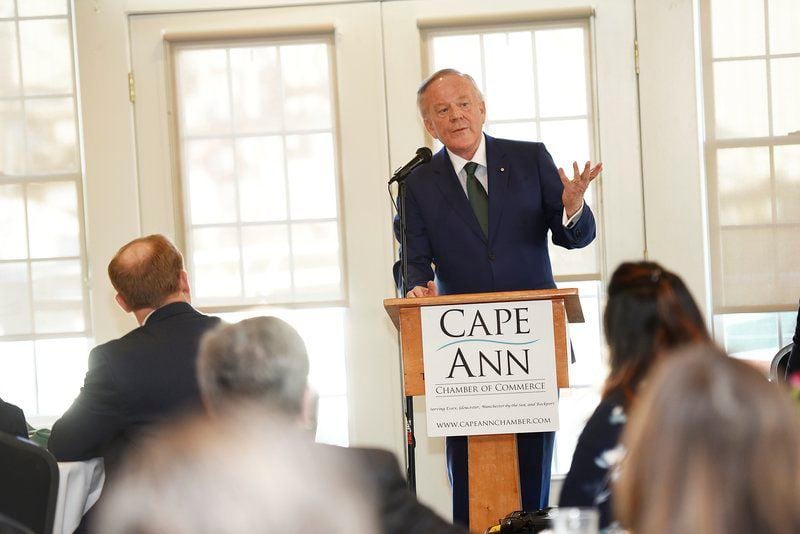 PAUL BILODEAU/Staff photo. Jim Brett, president and CEO of The New England Council, speaks at the Gloucester House during the annual Cape Ann Chamber’s Economic Outlook Breakfast, which has been held annually for more than 30 years.

“I am pleased to report to you that the state of the New England economy, much like the economy nationwide, is very strong,” announced James Brett, a former state representative and president of the New England Council, at the Cape Ann Chamber of Commerce’s annual Economic Outlook Breakfast.

Since October 1996, Brett has served the nation’s oldest regional organization as it works as a non-partisan alliance of schools, hospitals, corporations, and other private organizations throughout New England.

“We work with our members to advocate for federal issues, not state issues, but federal issues that will benefit the New England economy,” Brett said, pinpointing past discussions about financial regulations, trade and immigration.

Chamber Board President Tony Sapienza highlighted a few of Brett’s endeavors to address challenges, including his passion for working across parties to promote economic growth and a high quality of life throughout the region.

“He has been a leading voice for policy issues such as health care, education, financial services, and energy throughout New England and Washington D.C.,” Sapienza continued.

For Brett, the best way to address the challenges of the region is by collaborating across bridges and parties.

While the state of New England’s economy is positive, growing an average of 2.2% in the last few years, Brett projects a slowdown to 1.7% in 2020 and 1.6% in 2021 due to labor market constraints becoming more binding. However, the blue economy is on the upswing.

“A recent study has shown that the growth of the blue economy here in Massachusetts in recent years has outpaced the nationwide economic activity by a very significant margin,” Brett said, explaining that between 2005 and 2015 employment in the maritime industry grew 18%.

As some industries grow, Brett addressed the shortage of skilled workers to be one of the region’s biggest challenges.

“Our region simply does not have the workforce necessary for these innovative businesses to continue to grow,” he explained. “We must focus on developing our talent pipeline and ensure that our students have the skills and training to succeed in the jobs of tomorrow.”

Other concerns that the council is discussing include housing, free trade and expanding access to foreign markets for New England businesses.

A health risk to the future economy

In the pursuit of unifying the region for a better tomorrow, Brett sees one thing getting in the way: the new coronavirus, COVID-19.

As of Thursday morning, 99 cases were reported in the U.S. by the Center for Disease Control with the majority of reported cases in Washington and California.

On Wednesday, the House passed an $8.3 billion emergency spending package to address the disease outbreak. The funding package will help mitigate the outbreak and assist medical professionals in the pursuit of finding a cure.

“There may be a gray cloud over our head as we leave today, and that is the virus,” Brett said, referencing the 11 virus-related casualties stateside. “There is uncertainty going on in Washington on whether this is going spread to other parts of the country and affect the sectors of our economy.”

Whether it is trying to mitigate the spread of a deadly disease or preparing the next generation for the workforce, the region has a lot to talk about in the next couple of months.

“While overall the economy is doing well, we must be mindful of these challenges and remain diligent to address them,” Brett said.

In addition to Mayor Sefatia Romeo Theken and Rockport Town Moderator Bob Visnick, those in attendance at Thursday’s breakfast included representatives from local organizations such as The Open Door, The Enterprise Center, and National Grid.

Staff writer Taylor Ann Bradford can be reached at 978-675-2705 or tbradford@northofboston.com.