Day After Fed Uproar, Perry Tones It Down
As originally appearing in The New York Times 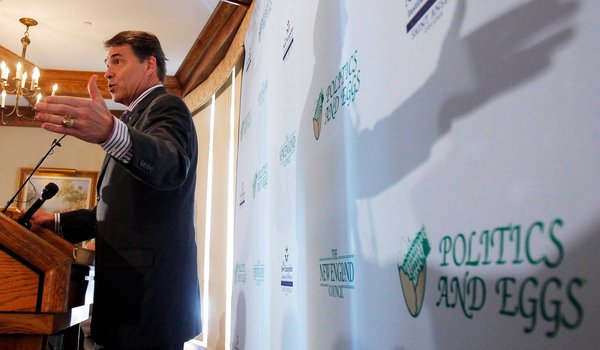 At a Politics and Eggs breakfast in Bedford, N.H., Gov. Rick Perry of Texas was more subdued than he had been as a candidate.

NASHUA, N.H. — When Gov. Rick Perry of Texas finished up a round-table discussion Wednesday at a manufacturing company here, one man was so impressed that he leapt from his seat, offering the governor high praise.

Mr. Perry, the man said, had come across as “very moderate,” especially compared with the caricature of him in the news media as somewhere to the “right of Attila the Hun.”

Mr. Perry — who once mused about Texas seceding from the country he now wishes to run — has never been known for his moderation. But voters in New Hampshire on Wednesday expecting to meet the man with a blustery confidence and down-home twang were greeted with a far more subdued and measured campaigner, one who stayed mostly on message about getting “America working again” and refused to answer questions from reporters.

“I got in trouble talking about the Federal Reserve yesterday,” Mr. Perry said to laughter at a Politics and Eggs breakfast in Bedford, referring to his sharply criticized comments suggesting that the actions of Ben S. Bernanke, the chairman of the Federal Reserve, were potentially “treasonous.”

“I got lectured about that yesterday,” he said. Still, he added, the Federal Reserve “should open their books up.”

New Hampshire in recent primaries has not necessarily been kind to Southern Republicans, with former Gov. Mike Huckabee of Arkansas, the winner of the Iowa caucuses, losing here to Senator John McCain of Arizona in 2008, and Mr. McCain beating George W. Bush, then the governor of Texas, in 2000.

Perhaps with that in mind, and with the furor over his Federal Reserve remarks still making headlines, Mr. Perry was less strident here on Wednesday than he had been since joining the campaign over the weekend.

“You know yesterday, the president said I needed to watch what I say,” Mr. Perry said, alluding to remarks by a White House spokesman that presidential candidates should be careful with their words. “I’d just like to respond back, if I may: Mr. President, actions speak louder than words. My actions as governor are helping create jobs in this country. The president’s actions are killing jobs in this country. It’s time to get America working again.”

At his two campaign stops in the state Wednesday, Mr. Perry did indeed seem to be watching what he said, offering up a less free-wheeling and off-the-cuff presence. At the business round-table, he followed the example of Mitt Romney, going around the room and asking for questions and comments, and he spoke in a voice so soft and level that reporters had to huddle around the table, leaning their microphones in to pick up his comments.

And at the Politics and Eggs breakfast, many of his usual applause lines were met with only tepid applause, if that.

“He was tired, he gave some of his stock answers, he wasn’t definitive, and I think he’s got a long way to go if he wants to impress people in New Hampshire,” said State Senator Lou D’Allesandro, a Democrat. “He didn’t have the cowboy boots, he didn’t have the swagger. When you come here, you’d better be prime time.”

New Hampshire voters often embrace a moderate strain of Republicanism, which could give many of the locals here pause about Mr. Perry. His challenge was underscored when Jim Rubens, a Republican activist and high-tech investor from Etna, asked Mr. Perry about climate change. (Four years ago, Mr. McCain, before winning the primary, said on the campaign trail that climate change was a real, man-made problem that needed to be addressed.)

But Mr. Perry said Wednesday that carrying out programs to reduce carbon emissions would cost “billions if not trillions of dollars.” He acknowledged that “yes, our climate has changed,” but he accused scientists of manipulating the data and was skeptical that human behavior was the cause.

Mr. Perry’s answer did not sit well with Mr. Rubens.

“He’s a very impressive candidate, but he was factually wrong on the earth’s climate,” Mr. Rubens said.

“You have to deal with technology and science as it is, and for him to say that the National Academy of Sciences is wrong,” he added, “calls into question the entire scientific discovery process.”

As Mr. Perry made his way out of the breakfast, he refused to answer all but the most mundane questions from the news media throng that surrounded him, allowing only that New Hampshire was “beautiful.”

So, one reporter cheekily asked, is he just the strong silent type?